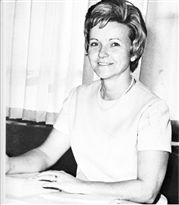 In Memoriam of Shirley Clary, AFSC

1/6/2021
It is with much sorrow that Calvert Hall shares with you news regarding the passing on January 6, 2021, of Mrs. Shirley Clary, AFSC. She was a dedicated wife, mother, Calvert Hall employee, and “CHC mother” to generations of alumni. Clary and her late husband worked at Calvert Hall for a combined 100 years of service.
Affectionately known to many as Miss Shirley, she became a member of the front office staff in the early 1960’s and worked at Calvert Hall for nearly 40 years before retiring as the assistant to the principal and president. Her late husband, Frank Clary, AFSC ’53, worked as the school’s treasurer and business manager for six decades.

Principal Chuck Stembler ’83 had the opportunity to know Shirley as a student and as a member of Calvert Hall’s faculty. He shared, “Shirley was a true gift. Her zeal, kindness, energy, and commitment helped generations of Hallmen. I have so many wonderful memories with her. She and Frank are synonymous with Calvert Hall.”

Calvert Hall was a second home to Shirley and Frank where they spent countless hours attending sporting events, viewing theatrical performances, and participating in alumni and Parents’ Club functions. Shirley would dress up annually as Mrs. Claus for the Parents’ Club Christmas party and was known for decorating her office for every official (and unofficial) holiday.

Retired principal Lou Heidrick, AFSC, worked with Shirley and developed a lasting friendship with her and Frank. “Shirley Clary, and Frank, devoted their entire lives to Calvert Hall. Her spirit and love of the school was unequaled. Shirley was always ready to undertake any task that would help enrich the Calvert Hall community.”

In the early 1980’s, the Christian Brothers recognized Shirley and Frank by making them Affiliated Christian Brothers. President Br. John Kane, FSC, added, “This is the highest honor the Brothers can bestow on a person. Shirley’s dedication and work for Calvert Hall earned her this great recognition that she received along with her beloved husband Frank. Our community has been blessed by her presence among us. She is now reunited with Frank and rewarded for a life well lived.”
Shirley was a devoted wife and mother to her son, Stephen Clary '76, and her daughter, Cynthia Rose. She adored her grandchildren Justine Bauer, Deirdre Foreman and Sean Clary.

In lieu of flowers, memorial gifts can be made to the Frank G. Clary ‘53 AFSC scholarship. Click here to make a memorial gift.

More information regarding the viewing and funeral will be shared once it has been released.
Back