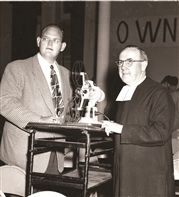 1/15/2020
Calvert Hall alumnus George Young ‘48, who was an outstanding football player (1944-1948) and coach (1954-1958) during his time as a Cardinal, has been selected to the Pro Football Hall of Fame.
The committee announced his selection on Wednesday, January 15 as part of the Hall of Fame’s special Centennial Class of 2020. Young will be inducted as a contributor (an individual other than a player or coach) for his time as a general manager for the Baltimore Colts (1968-1974), Miami Dolphins (1975-1978), and New York Giants (1979-1997), and senior vice president of football operations for the National Football League (1998-2001). He was voted as the NFL executive of the year five times (1984, 1986, 1990, 1993, 1997) and earned three Super Bowl rings – two with the Giants (1987, 1990) and one with the Colts (1971).
During his time as a coach at Calvert Hall, Young won an MSA title in 1957. Frank Culotta ’59 recalls his coach as a man ahead of his time who paid great attention to detail. “Mr. Young would have us go over the same thing until we all got it right. He was a technician who was hard, but fair.”
Tim Connor, nephew of George Young and spokesperson for the family, is elated for his uncle. “Our family has waited a long time for him to receive this honor. George was unbelievable, and very well-liked. The day has finally come, and it is very exciting.”
In a 2004 Baltimore Sun article, Lovey Young, the late wife of George Young, shared, “Calvert Hall meant more to George than any other institution.” Thanks to a generous donation from the family, an academic building and scholarship were created in Young’s honor. Dedicated in 2004, George Young Hall is a four-story, 50,000-square-foot- building, which houses classrooms, the George Young Library, an arts center, television studio, and technology lab. Brother John Kane, FSC, Ed.D., shared, “George had an amazing career, and we are grateful for the loyalty and generosity of the Young Family. George’s legacy will be forever recognized in our beautiful academic building that bears his name.”
Bob Patzwall ‘56, who played on the first team Young coached at Calvert Hall and served as his assistant coach at City College, said that although Young is thought of as a football man, he would be much happier to have his name on an academic building than on the stadium. He always valued the education he received at Calvert Hall and kept a close watch on the academic progress of the boys he coached, Patzwall said. "He saw most report cards before the parents did," Patzwall said. "When you played for him, he had your grades right up front.”
The Centennial Class of 2020 will have two opportunities to be formally enshrined in the Pro Football Hall of Fame. The annual Enshrinement Week Powered by Johnson Controls will take place August 6-9, 2020 and the Centennial Celebration will take place September 16-19, 2020. Both events will take place in Canton, Ohio, home of the Pro Football Hall of Fame.
Back