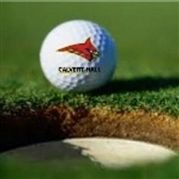 Steckler and Silva are both 4-year members of the Calvert Hall program while Crowley -- who played lacrosse as a freshman before joining the golf team in 2018 -- is a 3-year varsity golfer.
Steckler - a team captain in 2019 and 2020 - did not miss a match in his first three years, an accomplishment no other player has achieved in Coach Forrester's first 8 years at Calvert Hall.
Additionally, he played in three consecutive MIAA Individual tournaments with a career-best 6th place finish in 2019. He also earned All-MIAA honors in 2019 as the Cardinals went 9-3 and advanced to the conference championship match.

"Austin is one of the most complete players I've coached," Forrester says. "The cancellation of the 2020 season robbed him of a very special accomplishment; playing every match in his 4-year high school career. But his first three seasons were incredibly consistent and our program's culture reflects the contributions he made over four years with us."

Steckler will attend St. Joseph's University in the fall and play golf for the Hawks.

Silva saw extensive action as a freshman in 2017 and did not miss a match in his sophomore and junior seasons. He earned All-MIAA honors in 2018 and finished T5 in the MIAA Individual Tournament that same year.

He was an integral part of the 2019 squad that advanced to the conference championship match.
"Harrison had an outstanding 4-year run with us and I believe his senior year would have been his best yet," says Coach Forrester. "He was primed to have a big season for us in 2020. The thing that stands out most to me was how well he played in the big matches. He would always come in with key points for us."

Silva will attend and play golf at Franklin and Marshall College this fall.

Crowley, a 2-time All-MIAA selection, didn't miss a match in his two seasons with the Cardinals and captured the 2019 MIAA Individual Championship with scores of 73-71 at Eagle's Nest CC. He was also a team captain in 2020.

"Michael's transition from lacrosse player to elite junior golfer is one of the best stories you'll ever come across in high school sports," Forrester states. "He worked as hard as anyone I've ever seen and it was reflected in how quickly he rose to top of the MIAA. He enjoyed two outstanding seasons with us."

Crowley will be heading to Loyola University to play college golf for head coach Chris Baloga, a 2001 CHC graduate.

Forrester notes that all three departing seniors were great contributors off the course as well.
"Our program was blessed to have three players with incredible ability, but more importantly, they were outstanding representatives of Calvert Hall and the golf program. I couldn't ask for anything more than what those three did in their respective careers."

Smearman played three seasons of varsity golf and was a team captain on the 2013 MIAA Championship team. He earned All MIAA honors as a senior.

Grem was also a captain on the 2013 squad that beat Gilman, 12.5 to 8.5, to win the MIAA title. He played four seasons of varsity golf and earned All-Conference honors in 2012 and 2013. Paired with Smearman in his junior and senior seasons, the two were one of the MIAA's most successful duos.

"Those two guys made my first season at Calvert Hall so much easier," Forrester recalls of the 2013 campaign. "From the very first meeting, Nick and Jimmy served as outstanding leaders, not to mention the impressive quality of play they displayed. They were both very special student-athletes at The Hall."

Church earned four consecutive All-Conference honors (2009-2012) and finished in the top 10 in the MIAA Individual Championship in each of his four years. The Cardinals advanced to the semifinals in his four seasons as well.

"I didn't coach Alex but his performance at Calvert Hall was simply outstanding," says Forrester. "Four years as a starter, four years as an All-Conference player and four straight top 10 finishes in the conference tournament. That's an incredibly impressive run for a high school golfer."

All four Honorable Mention performers won All-MIAA honors, with Burton and Muddiman playing on the '13 team that won the MIAA title. Camille and McGinnis both spent four years playing for Coach Forrester.

"Those four young men all played outstanding golf for us," Forrester said of the Honorable Mention selections. "Grant and Matt were major contributors to our championship team. And they were outstanding captains the following season in their senior year. Ryan and Finn spent four years with me. Both of them were excellent players at the high school level and they each went on to play in college as well."
Back